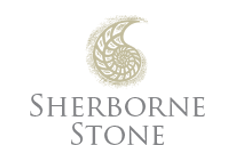 This quarry produces Sherborne Stone which is an oolitic sandy limestone from the Jurassic period formed when this part of the world was a warm shallow sea. There are over ten metres depth of building stone beds found within this quarry with different beds having different characteristics. Some of the beds produce large blocks of stone up to 30 tons in weight. Other beds have strong bioturbation which gives a rich variety of colour within the stone.

Frogden Quarry produces the type of stone that was used to build the majority of the older parts of the town of Sherborne. The stone is also a good match for stone used in the historic parts of a number of other local towns including Yeovil, Milborne Port, Beaminster, Crewkerne, Ilminster, Bridport, Castle Cary, Sturminster Newton, Martock and South Petherton. It is also a good match for the stone used in a number of villages in Dorset and Somerset includingÂ  Thornford, Bradford Abbas, Over Compton, Nether Compton, Trent, Sandford Orcas, Corton Denham, Poyntington, Chideock, Burton Bradstock, Powerstock, Netherbury, Melplash, Mapperton, Loders, Askerswell, Broadwindsor, North and South Perrott, Haselbury Plucknett , Misterton, East and West Coker, Hardington Manderville, Meriott, Abbotsbury, Marnhull, East and West Stour, Todber, Fifehead Magdalen, Bourton, Yarlington, Charlton Horethorne, Blackford, North and South Cadbury, Maperton, and Compton Pauncefoot. The stone may also be a good match stone used for many towns and villages in the Wiltshire as well as those used widely in the Cotswolds and the Midlands.

We have a limited supply of fossil material for sale at our yard including ammonites.

This quarry produces Forest Marble stone also from the Jurassic period which is a hard shelly limestone laid down in a shallow warm sea but some millennia later than Sherborne Stone. It is a thinly bedded limestone ideal for drystone walling and paving as well as for building.

It has been extensively used in the past to build local towns and villages such as Stalbridge, Wincanton, Bruton, Frome, Lillington, Longburton, Henstridge, Yenston, Templecombe, Horsington, North and South Cheriton, Bishops Caundle, and Holwell. It is also a good match for the stone used in many other towns and villages Dorset and Somerset as well as further afield into North Wiltshire, the Cotswolds and the Midlands.